One of the most difficult things to figure out when you are starting to play the piano by ear is how to make nice sounding chords. It easy to use simple diatonic triads when we first learn to play songs.

But what are these musicians doing to make their chords sound so sweet tho?!!! And why don't my chords sound like other guys who are playing the exact same chord?

Here are the Steps to creating amazing Major Chord Voicings

You must know all of your basic Triads before you can extend them to make them fuller. You will be surprised at how many musicians are not able to do this quickly.

A Quick Way to Modernize your Triads

Take one of the triads, whatever note is in the middle, play that note again with the left hand. Then drop the middle note one WHOLE STEP.

See the example below using Eb Triad as an example.

Know your scale degree numbers of every key

When you play by ear it is important to have the numbers for every key memorized. These numbers will help you change key, create extensions, communicate with other band members, and help with notating music. This screenshot of the video above shows us the notes of the C Scale in order: 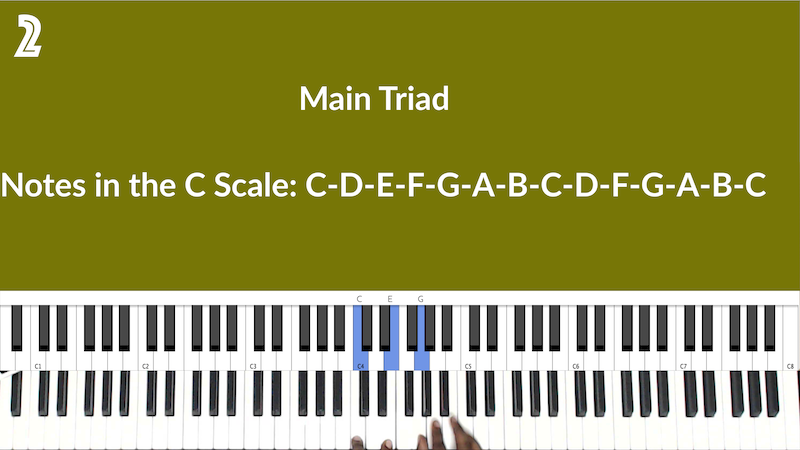 All of your notes in a C Major Chord come from the C Scale in some way.

It is Very Important to know all of your scales for every key. Chords come from Scales.

When building chords, use the odd numbered scale degrees. The main triad would be 1, 3, and 5. The extensions would be anything after 5: 7, 9, 11, 13, and #11. Generally we do not use the 11 as an extension of a C Major Chord, since it confuses the ear and makes it sound like a dominant chord. 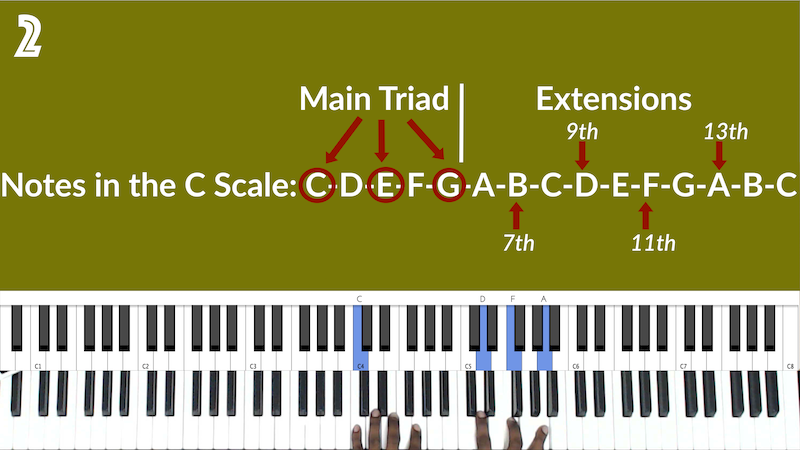 Generally we do not use the 11 as an extension of a Major Chord, since it confuses the ear and makes it sound like a dominant chord. See the two examples below 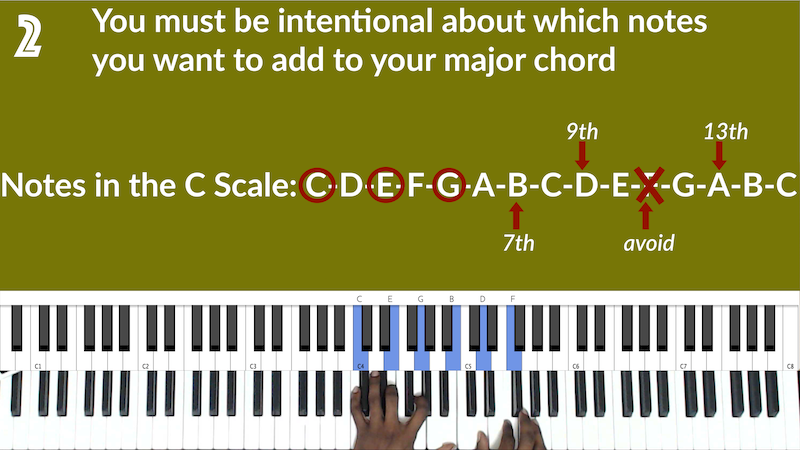 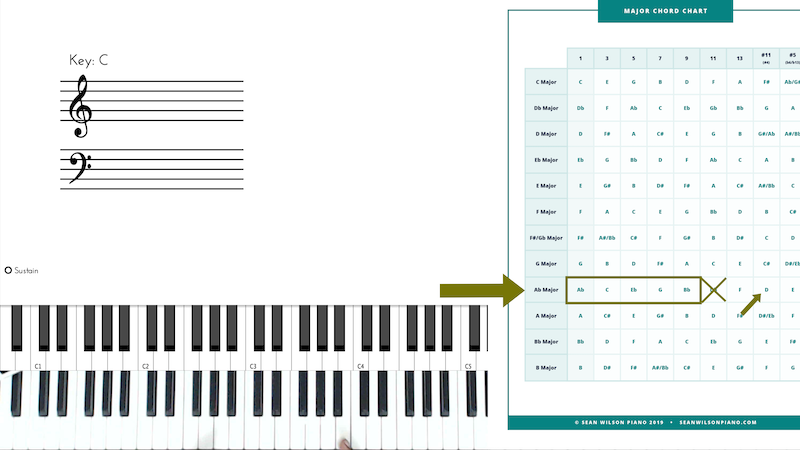 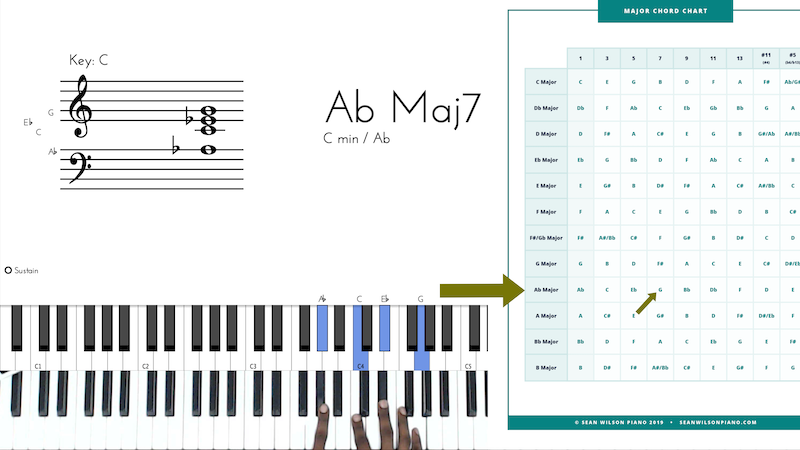 The resulting chord will be called a Major Seventh Chord. We usually just write Maj7 or M7 to indicate this a Major Triad + the Seventh Note. In the example below we added the 7th note (G) to an Ab Major Triad (Ab-C-Eb)

After that you add the 9th extension. 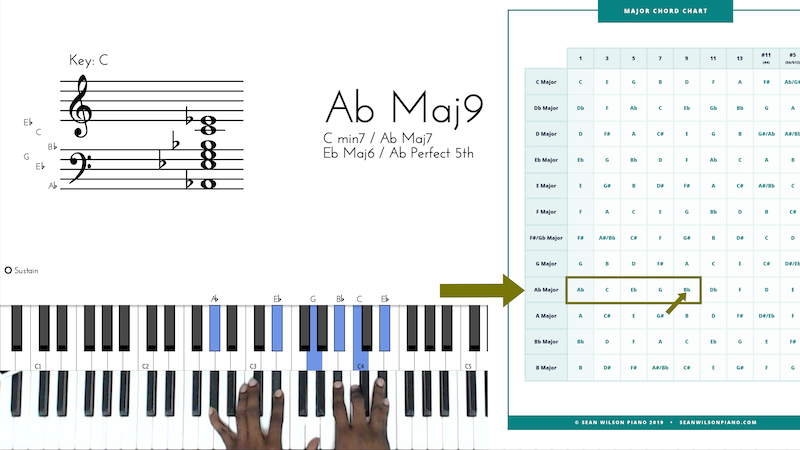 The chord is a Major 9 Chord. These are some sweet sounding chords!! Doobie Powell uses these voicings a lot in the song "Hallelujah, you have won the victory" In the example below we added the 9th note (Bb) to an Ab Major 7th chord

Notice in the example above that the notes do not have to be in the exact order as you see on the chart. Changing the order of the notes around is sometimes necessary in order to give "space" especially in the left hand when you do not want notes too close together

There are several special chords that you should memorize in every key to use as potential replacements for some of your Major Chord Voicings: 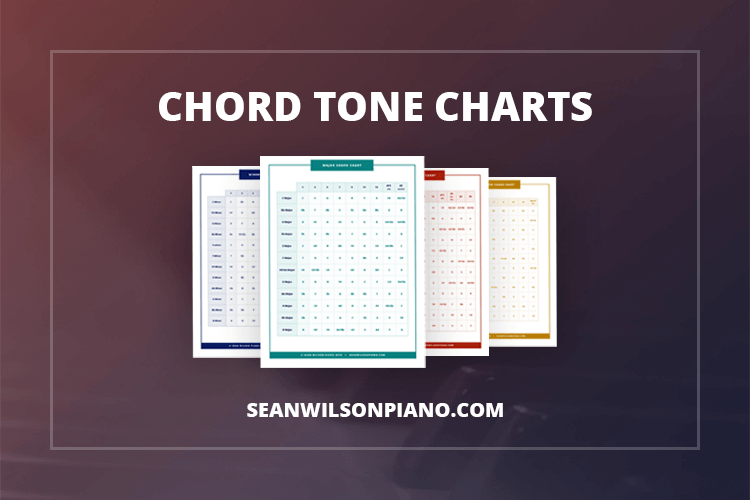 Gain Victory of Weak vocabulary and a Bad Ear

Please log in again. The login page will open in a new tab. After logging in you can close it and return to this page.